Paul Freyburger from Stuttgart is granted patent no. 1454 for a kneading and mixing machine with two elliptical agitator discs.

Paul Pfleiderer contractually takes over the patent for all time and all countries.

The joint enterprise Werner & Pfleiderer is entered on the Commercial Register of the Cannstatt Local Court. In the beginning, the company makes mixing machines but the market and army provision offices soon start demanding complete systems for making rusk. Pfleiderer initially buys the necessary dough rollers, cutting machines and ovens from England. Soon afterwards the company starts making its own.

Establishment of company's own production works in Vienna.

Around the turn of the century, Werner & Pfleiderer has subsidiaries in London, Paris, Vienna, Moscow and Saginaw (Michigan, USA).

The company Werner, Pfleiderer & Perkins Ltd. is established in London. Perkins supplies the special steam pipes for ovens production. The works in Cannstatt has the suffix "Cannstatt Steam Baking Oven Factory" added to its trading name. At the same time, Werner adds ribbon proving cabinets and taper round-moulders to the production range. The clientèle includes not only customers in the food industry but also chemical, paint and explosives manufacturers.

Richard Werner enters his father's company as a partner.

Otto Werner enters his father's company as a partner.

WP produces rubber washers, rubber kneaders and drying ovens for the rubber industry. Lehmann, the leading company in the field up to this point, is taken over.

WP Vienna, which by this time also builds aircrafts and aircraft engines, splits from Warchalovsky again so that "the WP specialties are not pushed out by orders for the military", according to the then managing director in Vienna, Otto Werner.

WP develops the Viennara mixing machine, which is the first to be driven by an electric motor. The first continuously operating suspension oven, called the "Auto Oven" by WP, bakes as many as 10,000 rolls an hour.

Production is given over to war requirements, i.e. field bakeries. Richard and Otto Werner join up as volunteers.

The company has lost 74 employees in the war. The plants in Britain and the USA are compulsorily expropriated. The British firm Joseph Baker & Sons buys the subsidiary in Saginaw and the British subsidiary, Werner, Pfleiderer & Perkins, and forms Baker Perkins Ltd. Numerous foreign branches have to be closed. The major part of the sales market is lost.

An agreement known as the "Credo Treaty" is signed with Baker Perkins. It is a general contract covering market and product development. WP makes the first ovens to be constructed in steel rather than brick-built.

WP suffers a financial crisis. To consolidate, the company is restructured and changed into a limited partnership.

Otto Fahr successfully fights for compensation for the Saginaw plant.

Otto Fahr becomes chairman of the board and, at the same time, silent partner, and eventually general partner in 1951.

The Depression has not spared Werner & Pfleiderer. The number of employees has shrunk from 1,350 in 1929 to 55 and sales revenue has plummeted from 16 million to 5 million marks.

The four-year plan of the National Socialist government invests in the use of synthetic rubber. Werner & Pfleiderer is involved in making the necessary machinery.

Zyklotherm heating is introduced into baking oven design. It involves a central gas or oil-fired heater that produces hot air as the heat conduction medium, which is then controllably directed via channels around the baking or drying chamber. This enables precise temperature regulation. It also reduces operating costs.

A new plant and office building are erected in Feuerbach near Stuttgart.

The company makes machines for field bakeries, supplies mixers for explosives, artificial silk and rubber, and manufactures parts for artillery weapons, aircrafts and rocket tail units (for the V II). The proportion of arms-related production is less than 20 %. Many former employees are at the frontline. In their place, so-called "foreign workers" are employed.

The factory in Feuerbach is largely destroyed by air attacks. The company is occupied by the French Army in April 1945.

WP survives on the repair and replacement needs of customers. The majority of the management is removed from the company by the denazification process.

Otto Fahr takes over the reins of the company again and his eventual successor, Helmut Steinmann, joins the business. Even though synthetic rubber production in Germany has to be shut down, WP's business with the chemical, plastics and rubber industries is booming. The plasticizer for PVC production is invented and establishes itself as the standard.

The first Matador oven is delivered. The MATADOR remains the most successful deck baking oven on the market to this day.

Separation of lines of businesses: the plastics division is split off as an independent operation headed by Günther Fahr.

Production of the MATADOR moves from Stuttgart-Feuerbach to Dinkelsbühl in Bavaria. The plot and buildings previously used as a sawmill are put to new use and reorganized in the years that follow, and finally replaced by new production halls and a new office building. New staff are recruited through newspaper, poster and cinema advertising and trained at company headquarters in Feuerbach.

The WP Group's entire oven production is based in Dinkelsbühl.

Production of machinery for artisan bakeries moves to Dinkelsbühl.

Werner & Pfleiderer sets new standards in the baking sector with the still unrivaled, computer-controlled OBER loading unit (a name that has since become synonymous with automatic loading of deck baking ovens), the first automatic tray loader for roll baking systems, the Robomatic, and the first flour-dust-free bread baking system. 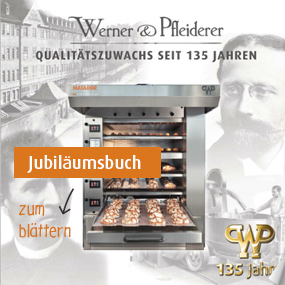